Disrupted: My Misadventure in the Start-Up Bubble is a book by former Tech Editor of Newsweek, Dan Lyons.  The premise of the book is that Dan is fired at Newsweek, hunts for a job as a non-journalist for the first time at age 52, and signs on to work at a Boston-based Silicon Valley type company named Hubspot.  Hubspot has tons of culture-based ‘silliness’ like a wall made entirely of candy dispensers, an office-wide Cinco de Mayo shutdown where they ship in a ton of tequila and food and everyone parties, and an annual Halloween party where people all wear costumes to work (this in particular is an affront to Dan as he has ‘never worked in a place where ADULTS wear costumes to work’).  It’s a fish out of water story in which Dan constantly mentions to the reader how he used to be someone, interviewing tech luminaries in a magazine that no one reads anymore.  Purported hilarity ensues…except it never does, and many of his complaints seem gratuitous and misdirected to someone that has personally worked in marketing and software driven companies for nearly a decade.

When I was 25, I began working at a relatively small software company named eTapestry as a sales guy.  At eTapestry, we had things like dodgeball tournaments, chili cook-offs, remote control car competitions, and during March Madness, things pretty much 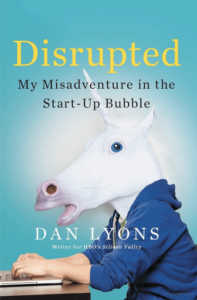 shut down so we could watch the ball games.  I wore shorts to work during summer and played basketball (poorly) with the CEO two times per week unless I was traveling.  I also washed my clothes in the company washing machines, played ping pong with coworkers, and when I got sweaty from all of the sports, took a shower at work.  We even dressed for Halloween in costumes – oh, the horror!  For someone aged 25, it was one hell of a good time.

However, we also worked our butts off and constantly traveled the country in luxury – which consisted of me taking the cheapest flights, the cheapest hotels and the cheapest mode of transportation (walking), whenever possible.  That meant a ton of red eye flights back from California and a few sketchy hotels where I had to have someone from a nighttime security team unlock the gate to let me in. I had a 3 course dining budget of $35 when traveling out west so as you can imagine, I ate at only the finest restaurants.  We didn’t make much money, we had large monthly quotas to hit, our sales cycle generally took 2-3 months, and under-performing sales people were let go left and right.  But all of this was formative – while I wasn’t a great salesperson, I was responsible for doing nearly all of my own marketing including setting up and speaking at seminars, webinars and conferences while also sending out emails and generating leads.  On top of my regular sales job, I was basically doing two jobs and I decided I liked marketing a whole lot more than selling.

eTapestry had a camaraderie that I have still not seen anywhere else between coworkers.  But that camaraderie wasn’t built by simply paying people good money and saying, get to work.  Instead it was built on the basketball court, or while whizzing a ball at someone’s head in dodgeball, and with end of the month tequila shots.  That culture led to great success for the company and yet, Lyons would have you believe that this type of culture is incompatible with success.  He would also have you believe that it is incompatible with people older than 30 yet eTapestry had many people over the ages of 30 and they fit right in.  What the culture was incompatible with was people that were close minded, set in their ways, and generally curmudgeonly – traits that seem to describe Lyons to a T based on all of the complaining he does in his book.

At my next software company, TowerCare, I worked from home in Indianapolis and the company was based in Pittsburgh.  TowerCare paid much better and I was able to stay at home with my wife and new daughter.  It was a perfect culture match for that time in my life where I was looking for more security and less travel craziness.  I did this for 3 years and while I desperately missed the twice a week basketball sessions I had previously at eTapestry, the job provided the right culture fit at the right time.  This is where Lyons really misses the point.  While he thinks that his experience with Hubspot’s culture was the only sane response, it was simply the wrong place for him to be at that time in his life.  He should have been at somewhere more traditional, like the government, where many employees still wear suits and never, ever have Cinco de Mayo celebrations featuring free tequila.

At Delivra, an email marketing software company, I was ready to get back out there and be around folks again.  It was time as sitting by myself all day, every day was making me realize how boring I can be (sadly my wife was right).  It was great to be back in an office and this time there were far fewer tradeoffs.  Delivra had (and still has) an outstanding company culture that helped everyone work together to get things done.  It also paid well.  Perfect fits like this don’t just come along by accident.  Before landing at Delivra, I spoke to a ton of friends about potential good fits in the local market.  I found out that Delivra was named one of the best places to work, and Delivra made current employees available to me to learn more about what the day to day looked like.  In other words, I knew what I was getting into.

When Lyons was let go from Newsweek, he wrote that he was desperate to find something and had not gone through the interview process since graduating college nearly 2 decades earlier.  Perhaps if he would have done more research and listened more attentively when people described the culture of Hubspot, he would have known from the beginning that this wouldn’t be a good fit.  While it does seem he was sold a bill of goods when he met with the founders of Hubspot (there are several spots in the book where Hubspot clearly drops the ball and indeed, is shown to be a less than admirable company), he should have seen the writing on the wall far earlier.  However, when he found out that he wasn’t going to be doing what he was told he would be doing or that his boss was 28 years old (which really seems to bother him), instead of immediately looking for something different, he tries to make it work.  Generally this is a huge mistake (unless you’re planning on writing a tell all book about the company).  When it isn’t a good fit and your company lies to you, get out!

Throughout the entire book, Lyons complains.  Among his many complaints are:

There are many things in the above list that I agree are problems (like flip flops), but when buying the book I didn’t realize I would be reading something far less interesting than an Andy Rooney rant.  Mr. Lyons certainly can be an interesting writer, he recently wrote one of the best episodes of the HBO sitcom, Silicon Valley.  My hope is that the next time he lands at a company, he tries to find the right culture fit at the right time in his life, and if he doesn’t, he knows when to cut and run.  But based on his previous actions, he will probably be taking notes and readying the sequel – Disrupted 2: How to Make Money Selling a Book of Complaints. How Much Do Email Marketing Lists Cost?

My buddy and I had a website when we were 18-19 years old that has been dead for well over a decade.  I won’t use the real address (let’s call it pardonusforbadwriting.com) since the content was sports related and displays a quality of writing (that though I was proud of at the time) has not exactly aged well.  We wrote a bunch of content, designed the website by scratch in HTML, and thought it was beautiful.  We even had our own site-specific email addresses, cody@pardonusforbadwriting.com and mybuddy@pardonusforbadwriting.com. We're 14 years older these days and over that time many things have come and gone and come