A Warning to Marketers Everywhere – Don’t Make This Mistake

A Warning to Marketers Everywhere – Don’t Make This Mistake

There is a game I can never win in public places where business is done – I call it, ‘Trying Not to Overhear Conversations After Forgetting to Bring My Headphones’ (or TNTOCAFTBMH for ‘short’).  You may have just figured out that people don’t pay me very often for my naming/branding skills.

Worker Person (WP): We had 20 more Twitter followers this month!
Boss Person (BP): Oh, cool. How many did we have before? 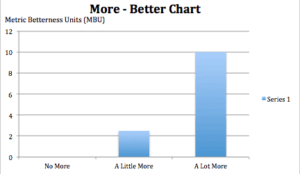 WP: 700.
BP: Oh okay.
WP: This is the first month we have had new subscribers in a long time. I’m really happy with it.
BP: Are they real people?
WP: [hadn’t considered this] Oh, I don’t know. My feeling is that if the numbers go up, then it doesn’t really matter!  More is better.

With my obnoxiously analytical, ROI-focused mind whirring with questions, I left the conversation behind and began thinking of how I may have chosen to present this information if I was still an internal marketer in a similar position. Here is how I may have presented the news:

Me: We had 20 more social media followers this month.
Boss Person(BP): Oh, cool. How many did we have before?
Me: 700. So it is only an uptick of 2.5% overall but it is an 80% increase over last month. Most importantly, we included tracking links for all of the things our followers clicked on over the last month. We were able to see that 3 visitors clicked on a Tweet that eventually turned into a lead. And since we’ve previously agreed that a lead is worth $500 for the company, that means Twitter was directly responsible for a portion of $1500 in leads.  It’s not much, but we have never been able to attribute monetary value to our social media campaigns and I plan on continuing to grow that value over the coming months.
BP: Wow, I didn’t know that we could attribute social media for revenue. How did you do it?
Me: I set up conversion tracking in Google Analytics – we can actually see if social media brought us a lead directly even if it was just a portion of the overall lead.  Since many times people come to a website from multiple sources, this multi-attribution reporting is also able to give us an idea of how many times we have to ‘touch’ people before they convert and also calls out the actual worth of the social media program.
BP: [jokingly] But if you are able to tie worth to the social media program, I may not be able to fire my social media person as soon as we hit on hard times.
Me: I know, and as the social media manager, I think you may have figured out my secret plan.

Marketers – I urge you – Tie yourself to revenue. It can be done – it must be done! Otherwise you are calling out things that really don’t matter to a person who may really like you, but he/she reports revenue numbers when they speak to their boss or their board, not social media followers.  When 500 followers can be purchased for $5, why do you care if you added 10 or 5000 if none of them are helping you build revenue?

THE PRIMARY REASON YOU DON’T WANT TO TIE YOURSELF TO REVENUE:

You are scared.  There, I said it.  And why should you have to?  After all, you aren’t in control of the sales process.  Why should you be held responsible for what the sales team can or can’t do with your awesome leads?

The easy answer is that if you can tie your position to the revenue the company generates, you easily showcase your value and doing that makes EVERYTHING easier.  It also makes it less likely you’ll be the first one let go when the company is having issues because ‘marketing doesn’t really do that much anyway’.

The trick is to figure out how much a lead is worth to your company.  That means you won’t be necessarily tied directly to real world revenue but you will be tied to the value of a lead based on historical data.  This is a much better thing to be tied to than some arbitrary KPI around website traffic, social media followers and their ilk.  Why?  Because none of those have dollar signs or will be discussed by upper management or in board meetings (or if they are, they will be discussed with very little knowledge).

Figuring out the worth of a lead to your company is easy.  To do it, find out how much revenue has been brought in by each source over the last year.  Divide that by the number of leads it took to generate this number.  This is how much each lead is worth for each source.  Of course, now you’ll have to get buy-in from management.  They need to 100% agree this number was not arbitrarily created, it is based on hard data.  Remember that they create quotas and budgets based on historical data – all you want to do is the same thing.  You want to use historical data to plan your marketing campaigns and this allows you to do it.  Once you have done this, you’ll know how much each lead is worth to you organization and so will your boss.  You’ll be having another conversation with your boss in no time.

Worker Person (WP): I would like a 12% raise.
Boss Person (BP): While we think you are doing a great job, raises just aren’t in the budget.
WP: I understand it wasn’t in the original budget but neither was the $88,000 of revenue I directly helped bring in over the last 6 months.
BP: $88,000?  Where did you get that number?
WP: We agreed that each lead was worth $500 and my efforts have brought in 176 leads above and beyond what we had the previous year at this same time. [Show data] BP: Wow.  I knew we were having a good last few months but I thought a lot of it was due to the sales team extra efforts.
WP: Since our lead worth metric was built on last year’s historical marketing and sales data, it assumes the same level of effort and quality as the sales team had the previous year.   Whether their extra effort is what made the difference is undetermined.  However, next year we will be able to build their extra work into the lead worth model.  This year, as we agreed, a lead’s worth is $500 and my work ethic has also been tremendous [this is where you give them a winning smile and wait].

At this point, you’ll find out a lot about the type of company and boss you are employed by.  Good luck my marketing friend.  You put your best foot forward and showcased your worth effectively, and I would love to have someone like you working with me. Use This Free Google Tool to Create More Engaging Content

During this video, I speak about a topic incredibly important for today's marketers - creating engaging content. One of Google's tools makes our job a lot easier. I go through the methodology for creating new titles and content using that free tool in this quick video.